Kids really do say the darndest things, or it’s all a matter of interpretation …

Here’s another layout and flash from the past: 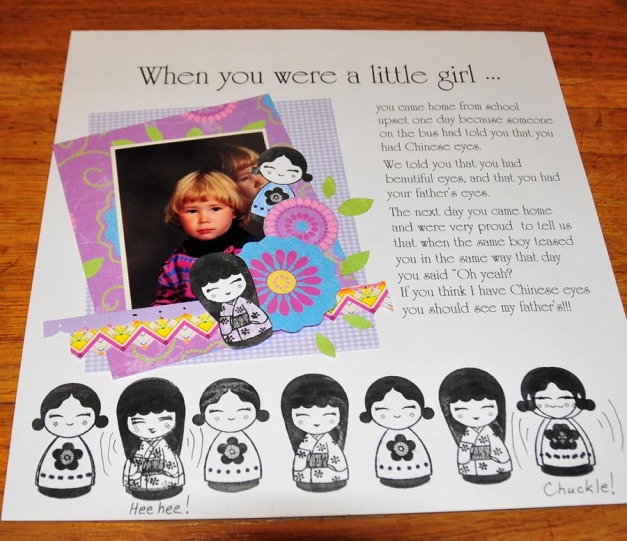 “When you were a little girl …

you came home from school
upset one day because someone
on the bus had told you that you
had Chinese eyes.
We told you that you had
beautiful eyes, and that you had
your father’s eyes.
The next day you came home
and were very proud  to tell us
that when the same boy teased
you in the same way that day
you said “Oh yeah?
If you think I have Chinese eyes
you should see my father’s!!!

We laughed, and we laughed.  You, of course, were very puzzled.  Those are memories to treasure.

As soon as I saw the stamps that I used for the bottom border and cutouts at Marchant Paper Memories, I remembered this very story and had to buy them to illustrate the story and preserve it! 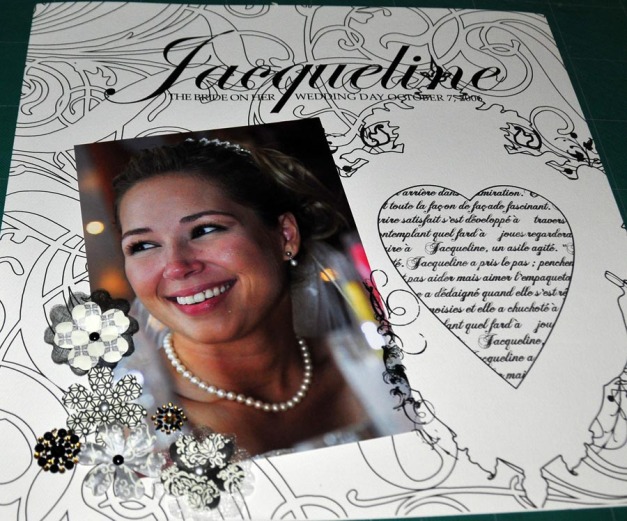 I cannot take credit for the photo, they were done by the photographer for the wedding.

I bought this paper a long time ago, I think at Sweet Sentiments.  I noticed that within the heart it  had the name Jacqueline repeated a few times. Wish I could have matched the font exactly for my main title, but it isn’t bad.

Just look at you now!

When you were a little girl you and your sisters liked to dress up in my old wedding dress.  I loved it as much as you,  you were so adorable.

I couldn’t help but match it with your “real” wedding photo. You were so beautiful that day. Well, you are every day, but that day was special. 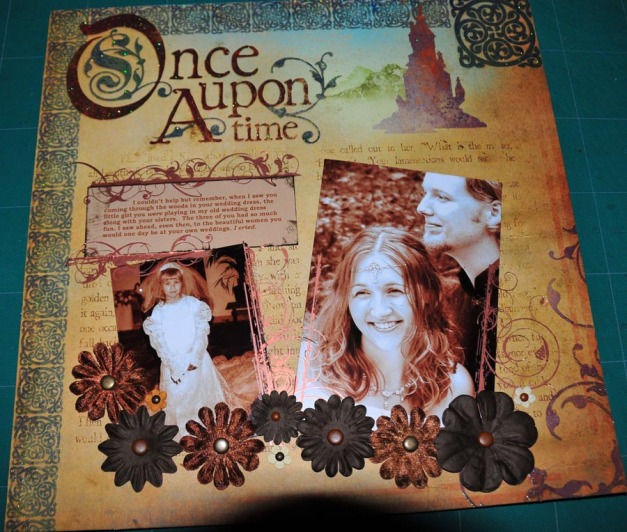 ’twas the nightmare before turning 27

Here’s a layout to celebrate Stephanie and what she loves.

She loves Tim Burton.  Her office is full of figurines based on his characters.  Awesome stuff. 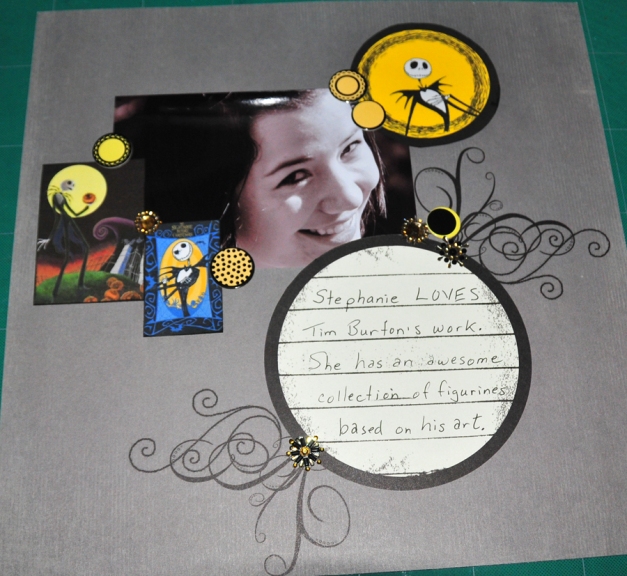 Time has passed so quickly.  I cannot believe that little Bunny Sue became this woman so quickly.

Cute as Bunny Sue was though, I have a really good time with the grown-up Stephanie. As awesome as it would be to time transport to when the girls were little I would not change what I have now with them

Grandfather and granddaughter dancing together at the little girl’s sister’s wedding.

My little Mary and her awesome grandfather, Ron Pennington.

In the narrative on the layout I tell Mary she is unlikely to ever meet another man as charming as her grandfather, and how he was with his wife Lorna, especially in her final illness.

He’s an awesome man.  Probably will remain my favourite of all time.

Here’s the layout.  More about Mary in another posting.  She is an incredibly determined, caring and dedicated person herself! I’ll tell you about when she shaved her head to raise money to grant wishes for children living with life threatening illnesses.

Chris bought a Fender Stratocaster a while back with money he’d been saving.  They’d looked around for some time until they found this used guitar in Belleville. It is a beauty, good condition, reasonably priced for the value.

Chris enjoys music, especially rock classics such as Led Zeppelin, Rush, Radiohead, and Pink Floyd.  He is doing exceptionally well teaching himself to play some of the classics he loves.  He is shy though, and will not play in front of others.  Figures his parents are just being biased parents when they tell him he is doing very well with it. I wish he’ d try singing too, I think he’d have an awesome singing voice.

He doesn’t even want to tell people he has the guitar, he is not materialistic and would hate for others to think he’s being spoiled by parents with expensive equipment. I like that about him, but I wish he didn’t worry about that. He saved for it for a long time and didn’t look for a handout. He never does.  He works hard learning his guitar too.   I like the kid.   I would, even if he wasn’t mine. 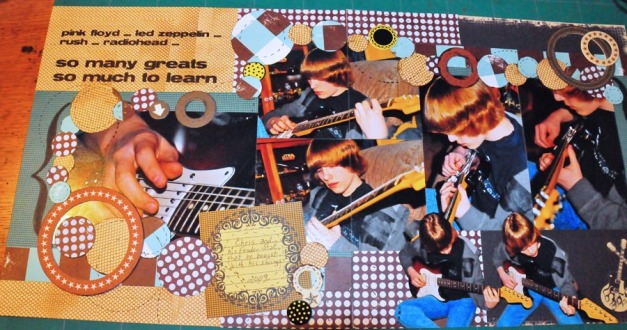 It’s a nice day for a white wedding …

Hey little sister, what have you done?

Hey little sister, who’s the only one?

Hey little sister, who’s the one you want?

it’s a nice for a white wedding

I remember Scott used to drive me crazy when we worked together because at that time I wasn’t too crazy about Billy Idol.  Not that I’m crazy about him now, but the aversion is not so strong.  I remember he bought me the album one Christmas for the office gift exchange just to annoy me!  Went two bucks over the five dollar limit to get it for me too, I think.  He’ll go to any length to annoy! It’s funny how the songs grow on you nostalgically after a couple of decades. I actually f ound myself cranking up the tune on the radio in the car the other day and rocking along … ewwwwwwwwwwwwwwwwwww.

Anyway, we had two white weddings in our family the summer/fall of 2006.  Here’s a layout of our daughter Jacqui’s wedding.  Just couldn’t keep the flash off the centre photo, darn it, but I’ll work it out.  I’ve got to pick up more technical skills with my photography.

Jacqui married a great guy, Chris Juranics.  Sorry you’re not in any of these photos in the layout, Chris, but the point of the layout was some “outtakes”  that happened when the photographers were taking some “Jacqui” family portraits after the ceremony.  Finally the last photo bottom right, everyone had their faces in their “official portrait” positions.  The “picture perfect” shots are real treasures, but sometimes the ones along the way are even better!

Hope you enjoy it! 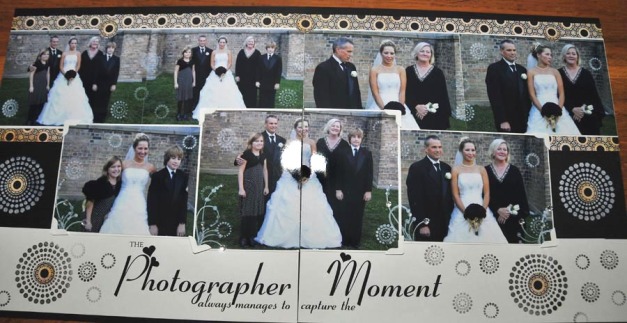